New in Qt 5.10: Texture Based Animations in Qt 3D Or how to blow things up

Many new features were added to Qt 3D in the 5.10 release. One of them is the support for sprite sheets, contributed by KDAB, as provided by QSpriteGrid and QSpriteSheet and their respective QML items.

One way of animating things is to switch between many different versions of the same object at different points in time, like the flip books we all enjoyed as kids. If you flip fast enough, you get the illusion of animation.

In the context of OpenGL and Qt 3D, images are simply textures and are very commonly used to add details to 3d models. The naive approach to animating texture would be to use lots of them. However, switching textures has a very high cost so traditionally modellers will use texture atlases, where all the images are arranged into a single texture. This does complicate modelling slightly as the original texture coordinates need to be modified to point to the portion of the atlas that now contains the relevant image.

In effect, sprite sheets are simplified atlases that take care of this for you. They are commonly used in 2d or 2.5d applications to animate effects or characters. 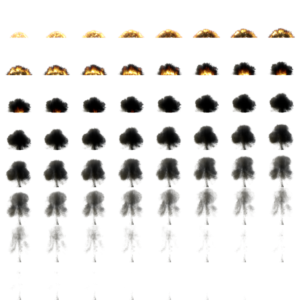 However, as with general atlases, all individual images need not be the same size or be arranged in a grid. In that case, individual sprites need to be specified by their bounding rectangle within the texture.

There’s a number of applications that can be used to create them. Blender can output steps in animations to a sprite sheet. TexturePacker can also be used to assemble pre-existing images.

In the simplest case, a sprite will be mapped on to planar surfaces, a simple rectangle. When applying textures to a surface, you of course need to provide texture coordinates, mapping points to pixels in the texture. In the case of the PlanarMesh, precomputed texture coordinates will map to textures such as it covers the entirety of the surface.

However, if the source texture is a sprite sheet, then the texture coordinates do not work any more as we want to cover the specific sprite, not the entire sheet.

One thing you do NOT want to do is replace the texture coordinates every time you want to change sprite.

In effect, texture coordinates need to be: 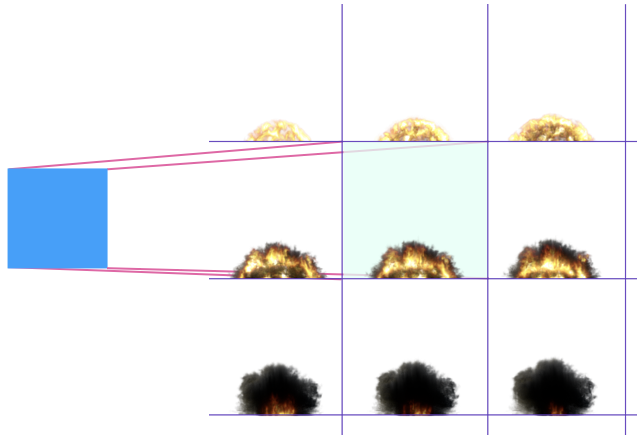 This transformation can easily be encoded in a 3×3 matrix which is applied to texture coordinates in the vertex shader. In order to support this, QTextureLoader has been extended with a textureTransform parameter which is passed to the shader as a uniform.

Putting it all together

A sprite sheet is conceptually very simple in Qt 3D. It has:

So simple animations can be achieved by changing the current sprite index and binding the texture transform to the matching property in the QTextureLoader instance.

QSpriteGrid is used when sprites are arranged in regular grid.

Images in the grid are assumed to be arranged in row major order. So currentIndex must remain between 0 and rows * columns. The texture property points to the image containing the sprites. The current index, number of rows and columns and the actual size of the texture are all used to compute the texture transform.

QSpriteSheet is used when the sprites are not all the same size and/or are not organised in a grid. You then need specify the extent of each sprite.

The currentIndex must remain between 0 and the number to QSpriteItem children.

In this example, we use a sprite grid which contains frames of an explosion. A timer is used to change the current index. While the animation runs, the object is faded out.

Looking straight on, you see a rather nice effect. The illusion becomes clear when you look at it sideways and see the plane on which the texture is mapped.