Qt 3D Changes in Qt 6 to the public API

Qt 6 is nearly upon us. While this has not been addressed by other publications, Qt 3D is also introducing a number of changes with this major release. This includes changes in the public API that will bring a number of new features and many internal changes to improve performance and leverage new, low-level graphics features introduced in QtBase. I will focus on API changes now, while my colleague, Paul Lemire, will cover other changes in a follow up post.

Distribution of Qt 3D for Qt 6

Before looking at what has changed in the API, the first big change concerns how Qt 3D is distributed. Qt 3D has been one of the core modules that ship with every Qt release. Starting with Qt 6, however, Qt 3D will be distributed as a separate source-only package. Qt 6 will ship with a number of such modules, and will use conan to make it easy for those modules to be built. This means that users interested in using Qt 3D will need to compile once for every relevant platform.

Since it ships independently, Qt 3D will also most likely be on a different release cycle than the main Qt releases. We will be able to release more, frequent minor releases with new features and bug fixes.

Another consequence of this is that Qt 3D will not be bound by the same binary compatibility constraints as the rest of Qt. We do however, aim to preserve source compatibility for the foreseeable future.

The first API change is minimal, but, unfortunately, it is source-incompatible. You will need to change your code in order to compile against these changes.

In order to make developing new aspects that access geometry data more straight forward, we have moved a number of classes that relate to that from the Qt3DRender aspect to the Qt3DCore aspect. These include QBuffer, QAttribute and QGeometry.

When using the QML API, impact should be minimal, the Buffer element still exists, and importing the Render module implicitly imports the Core module anyway. You may have to change your code if you’ve been using module aliases, though.

In C++, this affects which namespace these classes live in, which is potentially more disruptive. So if you were using Qt3DRender::QBuffer (often required to avoid clash with QBuffer class in QtCore), you would now need to use Qt3DCore::QBuffer, and so on…

If you need to write code that targets both Qt5 and Qt6, one trick you can use to ease the porting is to use namespace aliases, like this:

The main reason this was done is so that all aspects could have access to the complete description of a mesh. Potential collision detection or physics simulation aspects don’t need to have their own representation of a mesh, separate from the one used for rendering.

A mesh is typically made of a collection of vertices. Each vertex will have several properties (positions, normal, texture coordinates, etc.) associated to it. The data for those properties is stored somewhere in memory. So in order to register a mesh with Qt 3D, you need:

But this is still incomplete. We are missing details such as how many points make up the mesh and what type of primitives these points make up (triangles, strips, lines, etc) and more.

Prior to Qt 6, these details were stored on a Qt3DRender::QGeometryRenderer class. The name is obviously very rendering-related (understatement), so we couldn’t just move that class.

For these reasons, Qt 6 introduces a new class, Qt3DCore::QGeometryView. It includes a pointer to a QGeometry and completely defines a mesh. It just doesn’t render it. This is useful as the core representation of a mesh that can then be used for rendering, bounding volume specifications, picking, and much more.

Furthermore, up to now, this was completely internal to Qt 3D’s rendering backend and the results were not available to the user for using in the rest of the application.

So Qt 6 introduces a QBoundingVolume component which serves two purposes:

The minimum and maximum extents points are the corners of the axis-aligned box that fits around the geometry.

But how does QBoundingVolume know which mesh to work on? Easy — it has a view property which points to a QGeometryView instance!

So if you need to query the extents of a mesh, you can use the implicit values:

Note that if the backend needs to compute the bounding volume, this is done at the next frame using the thread pool. So the implicit properties might not be immediately available when updating the mesh.

If you need the extents immediately after setting or modifying the mesh, you can call QBoundingVolume::updateImplicitBounds() method, which will do the computations and update the implicit properties.

But you know the extents. You can set them explicitly to stop Qt 3D from computing them:

Note that, since setting the explicit bounds disables the computation of the bounding volume in the backend, the implicit properties will NOT be updated in this case.

Now, before everyone goes and adds QBoundingVolume components to all their entities, one other thing: QGeometryRenderer, in the Qt3DRender module, now derives from QBoundingVolume. So, it will also have all the extents properties.

It also means you can provide it with a geometry view to tell it what to draw, rather than providing a QGeometry and all the other details.

It still, however, has all the old properties that are now taken care of by the QGeometryView instance. If that is defined, all the legacy properties will be ignored. We will deprecate them soon and remove them in Qt 7.

So what happens if you provide both a QBoundingVolume and a QGeometryRenderer component to an entity? In this case, the actual bounding volume component takes precedence over the geometry renderer. If it specifies explicit bounds, those will be used for the entity.

The main use case for that is to specify a simpler geometry for the purpose of bounding volume computation. If you don’t know the extents of a mesh but you know that a simpler mesh (with much fewer vertices) completely wraps the object you want to render, using that simpler mesh can be a good way of speeding up the computations that Qt 3D needs to do.

Most of these computations took place previously in the Render aspect. Since this is now in core, and in order to fit in with Qt 3D’s general architecture, we introduce a new Core aspect. This aspect will be started automatically if you are using Scene3D or Qt3DWindow. In cases where you are creating your own aspect engine, it should also automatically be started as long as the render aspect is in use via the new aspect dependency API (see below).

The core aspect will take care of the all the bounding volume updates for the entities that use the new geometry view-based API (legacy scenes using a QGeometryRenderer instances without using views will continue to be updated by the rendering aspect).

Currently, its only purpose is to be able to completely disable bounding volume updating. If you are not using picking and have disabled view frustum culling, bounding volumes are actually of no use to Qt 3D. You can disable all the jobs which are related to bounding volume updates by setting QCoreSettings::boundingVolumesEnabled to false. Note that implicit extent vertices on QBoundingVolume component will then not be updated.

The base class for aspects, QAbstractAspect, has gained a few useful virtual methods:

Similarly, jobs have gained a number of virtual methods on QAspectJob:

We have introduced optimization for picking. A QPickingProxy component has been introduced, deriving from QBoundingVolume. If it has an associated geometry view, that mesh will be used instead of the rendered mesh for picking tests. This applies to QObjectPicker and the QRayCaster and QScreenRayCaster classes. Since precise picking (when QPickingSettings is not set to use bounding volume picking) needs to look at every primitive (triangle, line, vertex), it can be very slow. Using QPickingProxy makes it possible to provide a much simpler mesh for the purpose of picking.

So for example, you can provide a down sampled mesh, such as the bunny on the right (which only includes 5% of the total of primitives in the original mesh), to get fast picking results. 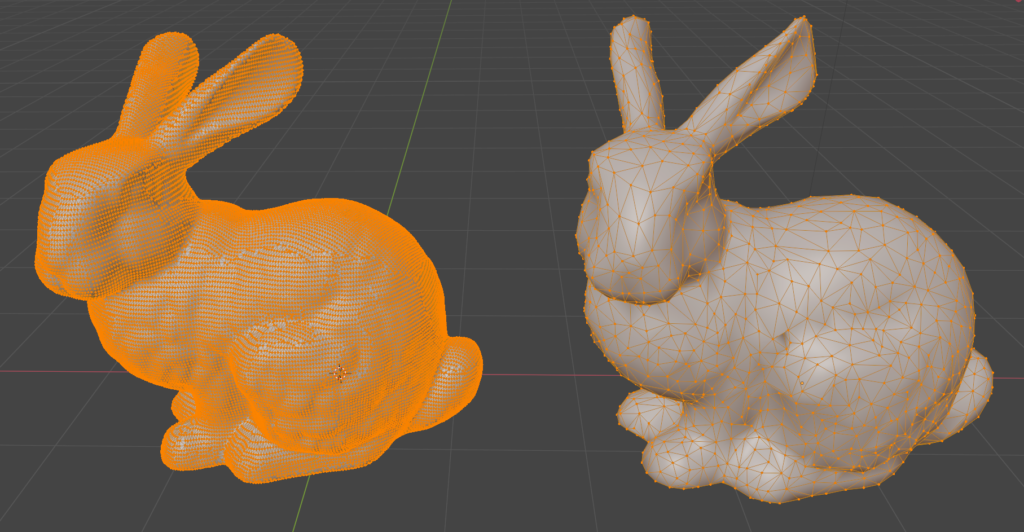 Of course, the picking results (the local coordinate, the index of the picked primitive, etc) will all be defined relative to the picking proxy mesh (not the rendered mesh).

Finally, QRayCaster and QScreenRayCaster now have pick() methods, which do a ray casting test synchronously, whereas the pre-existing trigger() methods would schedule a test for the next frame. This will block the caller until completed and return the list of hits. Thus, it’s possible for an application to implement event delegation. For example, if the user right clicks, the application can decide to do something different depending on the type of the closest object, or display a context menu if nothing was hit.

As you can see, Qt 3D for Qt 6 has quite a few changes. My colleague, Paul Lemire, will go through many more internal changes in a later post. We hope this ensures an on-going successful future for Qt 3D in the Qt 6 series.