Qt World Summit, organized by The Qt Company, is the premier Qt event of the year and follows on from Qt Developer Days that KDAB organized in the years 2012–2014. KDAB has been and continues to be a major sponsor and contributor to the event. Our experts give many of the in-depth technical presentations and we run the popular pre-conference trainings.

In 2018, The Qt Company hosted two, one day only, Qt World Summits – one in Boston in October, the other in Berlin in December. KDAB was the main sponsor at both events and offered a pre-conference training day in both locations. In the US, this was co-hosted with Qt Partner, ICS. 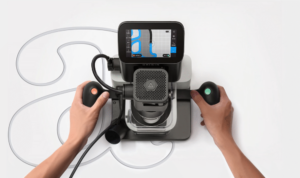 We showed three of our renowned Tooling demos and a spectacular example of 3D imaging for cancer research, from our work with Qi Tissue. We also had the awesome Shaper Origin (the world’s first handheld router) on display in Boston and Qt Quick Software Renderer (running on NXP i.MX6 ULL with no GPU/VPU/IPU), in Berlin. Naturally, all these demos use Qt. Read more…

In both locations we offered participants an opportunity to #color4cancer with the nanoQuilll interactive Wall.

Our expert trainers delivered five training courses in Boston and added three more at the bigger venue in Berlin. You can see more about our Advanced and Introductory classes here. All our classes were well attended, with around 150 participants at the QML Applications Architecture course offered by Tobias Koenig in Berlin.

These are the talks we presented at Qt World Summit:

Streamlined integration of 3D content straight from 3DS Max and Blender into Qt3D, with James Turner

developers import and control geometry and materials, while the frame graph can be used to build advanced rendering  effects with ease.   However, just as in the case of 2D content, best results are achieved when designers and developer share a common experience and toolset. Yet the tools used to author 3D scenes, the geometry, the materials, the lighting, the animations, are all very different from what most developers are familiar with. In this talk, we introduced techniques and principles which make the collaboration between designers and developers smoother. We identified the major pain points and highlighted tools and patterns for addressing each of them. We looked at data formats, model conditioning, runtime integration and rendering effects in order to produce compelling applications integrating 3D content with a traditional 2D interface, and we illustrated all these concepts with a running example.

Richard Feynman is considered one of the greatest physicists, largely because he was able to build lots of practical mathematical tools that greatly simplify the analysis of complex

phenomena, thus making them accessible and useful to many. KDAB maintains its position as the leading Qt consulting firm, partly because of the huge effort KDAB’s top-class engineers put into R&D projects to build great tooling for Qt applications. This tooling has helped countless other engineers solve bugs in their code, fix performance issues and prevent more problems from slipping into codebases. The cherry on top of all this Qt goodness is that KDAB publishes its tooling under Opensource licenses! This talk helped attendees discover how KDAB’s awesome Opensource Tools for Qt can help them.