New features and changes in the Kuesa 1.1.0 release

KUESA™ is a solution that provides an integrated and unified workflow for designers and developers to create, optimize and integrate real time 3D content in a 3D or hybrid 2D/3D software user interface. Models, including geometry, materials, animations and more, can smoothly be shared between designers and developers. Kuesa relies on glTF 2.0, an open standard which is being broadly used in the industry, so it can easily and seamlessly integrate with a growing number of authoring tools.

Kuesa is made of 3 main components:

This blog post outlines the new features and changes in the 1.1.0 release.

The main objective for this release was to ensure compliance with the Khronos glTF 2.0 specification. We made sure that Kuesa works on a wide range of target hardware, be it desktop, mobile or embedded. In addition, a great deal of work has been put into a nice technical documentation, following the Qt standards. This documentation is available at the following address : https://www.kdab.com/kuesa/

This release is marked by an ever-growing ecosystem of Kuesa-related tools, bindings and integrations.

First and foremost, full Python bindings for Kuesa have been developed – learn more about this here. Support for Kuesa extensions, such as layer support, is being worked on in the official Khronos Blender glTF exporter ; we will keep you posted about the progress on that. The 3DS Max Kuesa exporter can on its side be downloaded here.

gltfEditor (ex-assetpipelineeditor) has been improved, and a simple, minimal-dependency glTF 2 viewer has been implemented. It supports a few command line flags useful for testing and is simply named gltfViewer.

A new tool to process glTF 2.0 assets from the command line has been implemented. It is named assetprocessor. It allows for instance to compress meshes, and embed buffers in a glTF file or extract them.

Some tools have been renamed in order to make their main use case clearer.

glTF 2.0 support has been greatly improved in this release. Morph targets, which were missing in Kuesa 1.0, are now available.

Support for a few extensions and niceties has been added :

Post-processing filters have seen an overhaul, and can now leverage depth textures. In addition, a few new effects were implemented : depth-of-field and bloom. Bloom can be tested in the car scene demo, and all effects are showcased in the framegraph_scene test project.

Not as shiny as the latest Corvette, but still with a heavy dose of bloom!

Normals and tangents can now be automatically generated when missing (through the help of the MikkTSpace open-source library) – see the GLTF2Options. 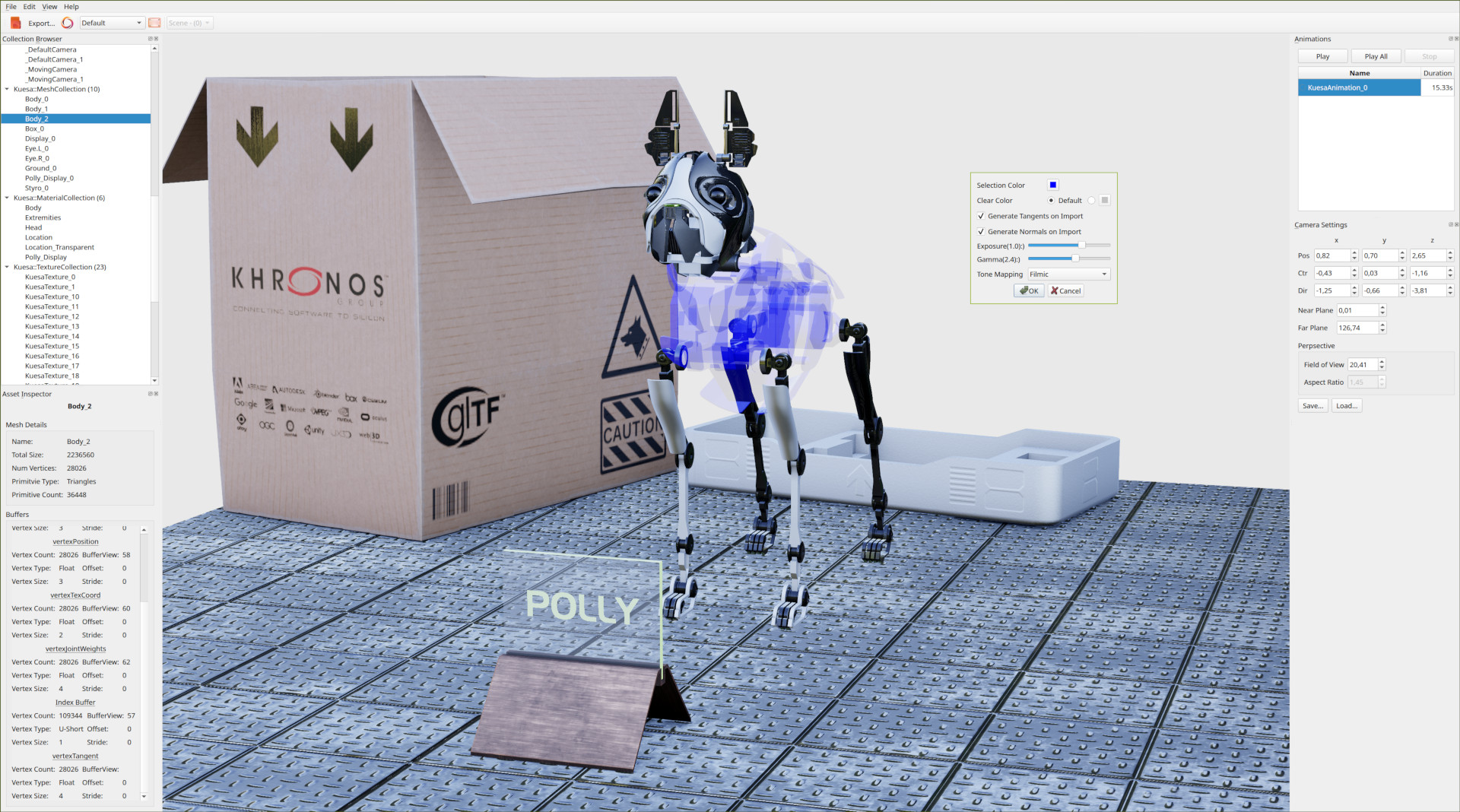 Polly model in the gltfEditor

A few new examples and demos were added : 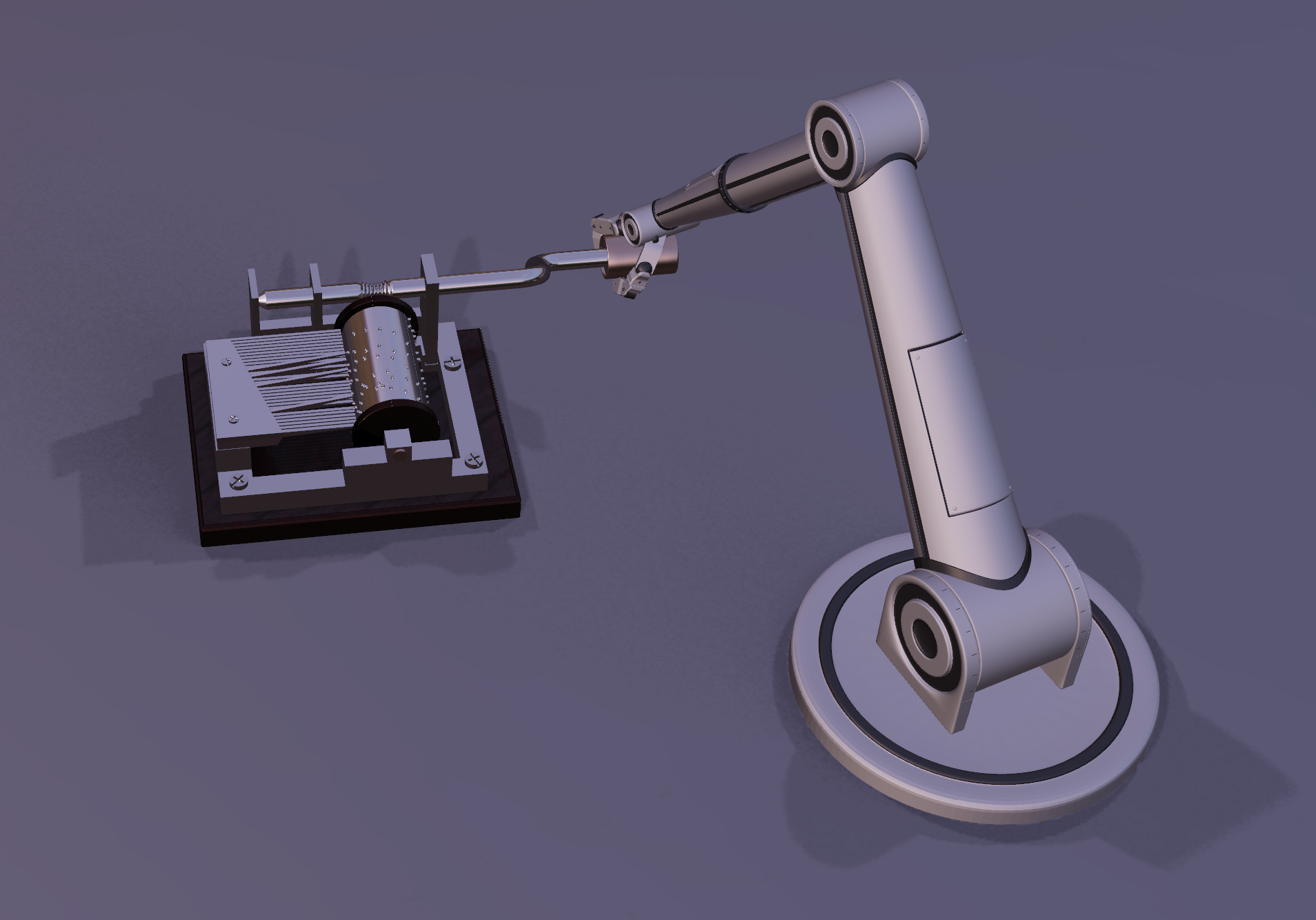 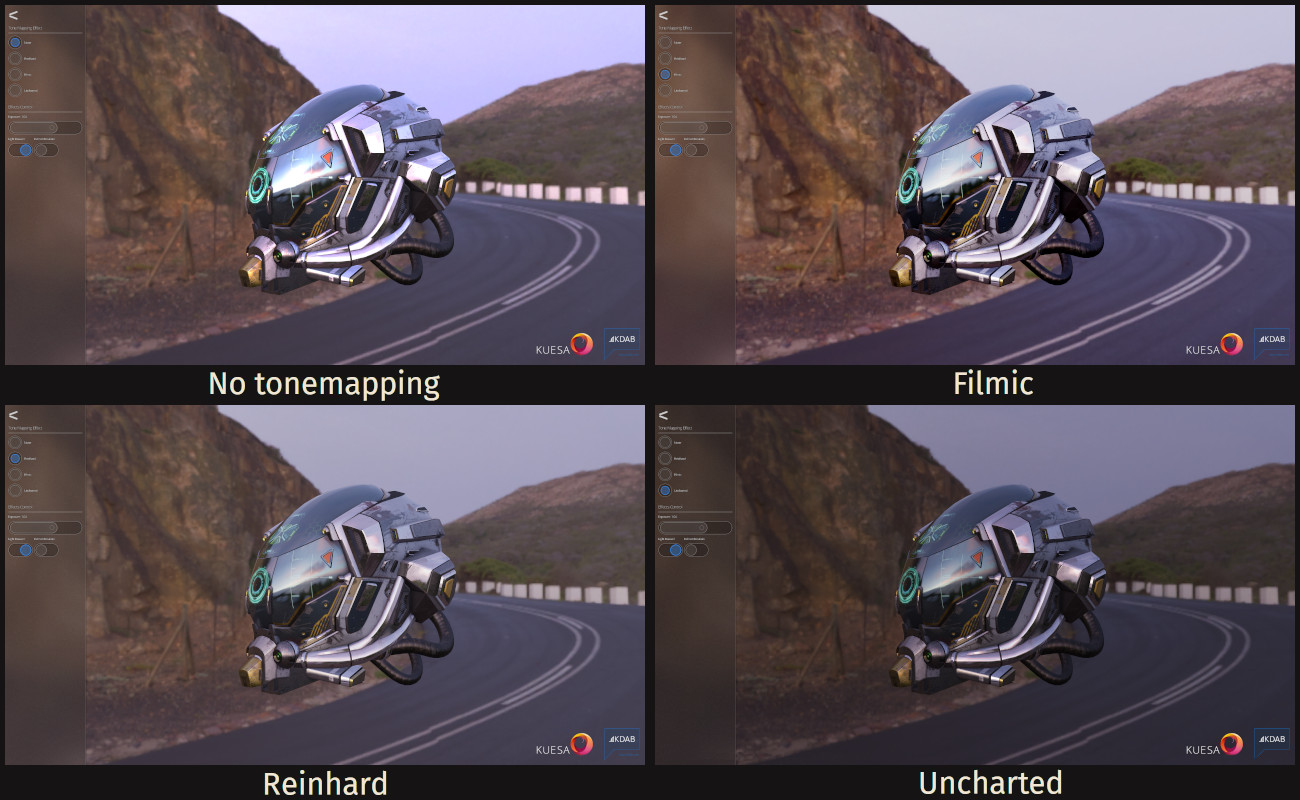 The codebase was thoroughly tested on a wide range of hardware ; as such, many fixes in multiple areas of the codebase were implemented. Various HiDPI and multisampling related issues were fixed. For instance, post-processing effects now support multisampling correctly.

Better performance was achieved for the car demo on low-power devices thanks to the use of pregenerated images for the user interface.

An infrastructure change has been put in place during this release cycle : dissatisfied by the pull request UI of Github, we migrated the code review to an open Gerrit instance, linked with our Github repository.

This instance is available at https://kuesa-codereview.kdab.com. Please use it to contribute!