KDAB was the main sponsor at Qt World Summit 2018.

We exhibited on both days, starting at 5pm on Wednesday December 5th. We showed: 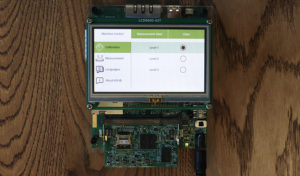 At Qt World Summit KDAB will show the Qt Quick Software Renderer in action on the very competitively priced NXP i.MX6 ULL platform. Thanks to some clever coding from KDAB, it provides a fluid 60fps touch UI and H.264 video decoding in spite of having neither GPU nor video decoding acceleration on the hardware.

You can now have the full feature set of Qt at your disposal, even at as little as 64MB of RAM and/or Flash memory.

Kuesa is a solution that provides an integrated and unified workflow for designers and developers to create, optimize and integrate real time 3D content in a 3D or hybrid 2D/3D software user-interface.

Find out more about Kuesa…

A high-level introspection tool for Qt applications, KDAB’s GammaRay allows you to examine and manipulate application internals at runtime, either locally or on an embedded target. Augmenting conventional debuggers, GammaRay leverages QObject to visualize application behavior at a high level, especially useful where complex Qt frameworks such as model/view, state machines, QGraphicsView or QTextDocument are involved. GammaRay is integral to the Qt Automotive Suite all-in-one package, where it also offers QtCreator integration.

Find out more about GammaRay…

Clazy Static Code Analyzer integrates seamlessly with most existing build systems, and is bundled with the latest versions of QtCreator if you don’t want to compile it your self.

Created by KDAB’s Milian Wolff, who will be talking about this and other KDAB open source tools at Qt World Summit, KDAB Hotspot profiler does all the heavy lifting for you, when you need to analyze profiling data on Linux Perf.

KDAB will be presenting the nanoQuill interactive display wall at Qt World Summit, where participants can literally help in the cure for cancer by coloring in images of cells. This is a collaboration between KDAB, the Qt Company, Quantitative Imaging Systems (Qi), and Oregon Health & Science University that crowd-sources electron microscope images of cancer cells for people to artfully color, thus #color4cancer.

Once photographed, completed images can be sent to the nanoQuill website where machine learning engages in discerning cell micro structures, helping us understand how tumour cells develop resistance to escape cancer-targeting drugs.

Find out more about nanoQuill….

In Berlin, we hosted a training day on December 5th  offering both Introductory and Advanced one day training classes and on December 6th you could  listen to two talks from KDAB experts:

Streamlined integration of 3D content straight from 3DS Max and Blender into Qt3D, with James Turner, and