A few days ago, a customer using our KD Soap library reported an interesting problem with it. The library worked perfectly to access the SOAP server, but there was some noticeable latency when doing a series of requests in short succession from the client. This latency should not have been there, as both the server and the client were in the same local network.

An investigation began, regarding whether the client code or KD Soap were doing something suboptimal, like reconnecting to the server all the time, or something like that. The actual reason turned out to be something much more profound: a 6-year-old bug in QNetworkAccessManager (at least, that’s when it was reported. I think the bug is at least 10 years old…)

What’s QNetworkAccessManager (or QNAM, for the friends)? It’s the central class in Qt to issue HTTP/FTP requests (incl. HTTPS, HTTP/2, etc.); KD Soap uses it to implement SOAP over HTTP.

Did you know?
In Qt Creator, you can type just upper case letters of a class name (like QNAM, QAIM, QSFPM) — and Creator will offer to autocomplete it for you!

So, “not our bug”, problem solved… maybe for us, but certainly not for our customer!

Therefore, I took a shot at the issue anyhow, as personal curiosity. (Mandatory reminder: KDAB contributes a lot of code to Qt!)

Using a network sniffer like Wireshark, the problem quickly emerged: each SOAP request, transported through a POST method, was sent by QNAM split over multiple TCP segments.

In the first few exchanged segments, nothing special happens:

The whole exchange (establishing the connection, sending the request, getting an answer) took less than 3 milliseconds. Pretty reasonable, considering everything is happening inside the same local network.

Now this is when things start going wrong. The client did not make just one request; it made several, in quick succession. These requests got queued inside QNAM. QNAM implements HTTP persistent connections, so the TCP connection is not immediately shut down after the request has been served. Instead, once QNAM receives the reply, it’s able to immediately send another request. This happens in the next exchange:

It looks pretty much like the last exchange, minus establishing the connection, doesn’t it? There’s however a small but important difference: if you carefully look at the timestamps, you may notice that this request took almost 50ms to be served! That’s 10-20 times more than the first one!

If we keep going, we have another request, and this one also takes 50ms:

These delays would just keep piling up; in order to send 20 requests we take over one second, rather than less than 0.1s (as it should be). What’s going on here? Where do these delays come from?

As hinted in the bug report, the problem is a very subtle interaction between QNAM and the underlying TCP stack. The TCP protocol itself, as well as the API that operating systems offer to use it (e.g. the socket(2) APIs on Unix) feature a lot of knobs to fine tune TCP’s behavior. This is intentional, and done in order to make it perform better: reduce latency, increase the used bandwidth, reduce the number of segments exchanged on the network. Some of these knobs are entirely opt-in because whether they make sense or not depends on the application.

A couple of these optimizations are usually enabled by default, and are the cause of the problem here.

The first one is called delayed acknowledgments. In order to reduce the load on the network, one side of a TCP connection may decide to wait a bit before sending out an acknowledgement for the data it has just received. (Of course, it must not wait too much, or the sender may trigger a retransmission thinking that the data it just sent got lost!) It’s a pretty simple idea: give the other side the chance of sending more data; if this happens, the receiving side may send only one segment acknowledging all the data received. (Yes, this is perfectly legal in TCP.)

The second one is called Nagle’s algorithm. This is an algorithm that again tries to reduce the network load by having one side not transmit data too often (until certain conditions are met). The idea is that if a TCP application has to send small chunks of data, it would be better for the TCP stack to buffer all the data and then send it out in one segment. Of course, sooner or later the data has to be sent, and the algorithm controls when.

How does QNAM manage to break all this? When QNAM has to issue an HTTP request with a body (such as POST or PUT), it does two different writes into the TCP socket: first it writes the HTTP headers, then it writes the body of the request. This “double write” causes an interesting chain of events:

Steps 2-4 can happen in a slightly different order, but the result does not change: we have a 50ms delay, introduced by TCP, which is affecting our requests.

What can we do to fix this? This should really be fixable: the overall data we want to transmit (headers+body) fits in one TCP segment — sending two and having to wait before transmitting the second sounds just wrong.

Note that we do not necessarily control the server, so disabling delayed ACKs is out of the question.

I have implemented and submitted this last solution to Qt.

Enough talk! Give me the code!

Ok, ok… the patch that fixes the problem is here. At this time, it will only be present in Qt 6.0. Qt 5 is in “bugfix only” mode, and since this issue has been present throughout the entire Qt 5 history, it was not deemed safe to apply the change there as well.

Still, it doesn’t mean you cannot just cherry-pick the patch into your local build of Qt 5, if your applications are affected. It should apply without issues. In fact, the customer was able to try it out and confirm that it solves the original issue they were seeing. Whew!

At first I didn’t want to write a blog post simply to discuss “yet another bugfix that landed into Qt”.

But then, I decided to take this opportunity to also say something else. Many of our customers are (positively!) surprised by the huge skillset found within KDAB. By hiring us, customers don’t get just someone to write some code for them; they get access to a great talent pool. Within KDAB there’s enormous technical knowledge. Each engineer is of course broadly skilled in computer science and programming, but they then have tremendous specialized skills in one or more focus areas:

Valve’s Handbook for New Employees puts it in a very nice way:

We value “T-shaped” people. That is, people who are both generalists (highly skilled at a broad set of valuable things — the top of the T) and also experts (among the best in their field within a narrow discipline — the vertical leg of the T). 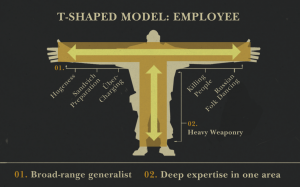 Or, to use the words of my ex-colleague Jean-Michaël:

All the above bugfixing story is actually about knowing how things work, all the way from HTTP, into Qt’s code, and down to low level details of TCP/IP programming. Does it mean that I’m just “that good” and happen to know just about everything? We both know that is not true.

This is possible, not only because KDAB hires T-shaped individuals, but also because it nurtures its employees so that their strong “vertical” skills can actually grow over time, while also embracing more “horizontal” skills. We are constantly encouraged in our professional growth, and that’s not something always found out there.

That’s what makes the difference for KDAB.

(If this made you curious about what it means to work with us, feel free to visit our careers page and drop us a line.)

In the meanwhile, thanks for reading!