Qt is a high quality library, but it is also massive in number of features. This massive number results in a higher likelihood that there are bugs that go unnoticed lying around in its less frequently used features or combination of features.

Our friends at qgis.org hired us to solve some of those issues that had been affecting them for a while. QGIS is an open source geospatial information system (an application which allows users to design maps, analyze spatial data, and perform various ETL tasks) that makes use of the Qt library for its GUI components and relies on the QPainter framework for all of its map rendering and exporting functionality. Instead of trying to workaround these issues in their downstream project, the QGIS leadership instead invested some project funds to contract KDAB to fix these rare issues which were specifically affecting the QGIS application. Keep reading to follow our adventures through those less often traveled paths.

SVG, Scalable Vector Graphics, is commonly used to share graphics that need to be drawn at arbitrary resolutions. We fixed two issues in that area regarding the parsing of elements: 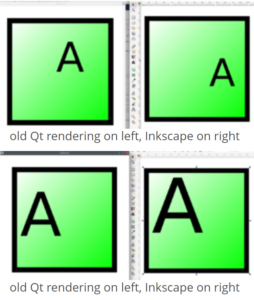 SVG has several specifications, 2.0, 1.1, and Tiny 1.2, each supporting different features. The Qt documentation is relatively clear that it supports a subset of features of Tiny 1.2: https://doc.qt.io/qt-5/svgrendering.html. That’s fine when you control the SVG that your application renders; your designers are a bit sad but can usually adapt to it. It gets much more complicated, however, when your application can use SVG files provided by the users. It’s relatively harder to explain the distinctions of the several SVG specifications to a normal user.

You can choose multiple units to represent SVG elements. Take, for example, the x,y properties of a text element. The definition in the specification (https://www.w3.org/TR/SVGTiny12/text.html#TextElement) is a bit long. But, after a few clicks, you end up with something that says:

If we do the same for the SVG 1.1 spec, it doesn’t have that restriction of optional units only being valid for the width and height properties.

Here, we colored a bit outside the lines because the Qt code was fine. It said that it supports SVG Tiny 1.2 and, as such, misrendered files that use unsupported features (like saying x=”15pt”), but given that supporting that feature was less than 10 lines. See https://codereview.qt-project.org/c/qt/qtsvg/+/376065 and https://codereview.qt-project.org/c/qt/qtsvg/+/376066. We applied the Robustness principle and allowed ourselves to be a bit more flexible in what we accept.

QFont Ignored Stretch Value When Used Together with styleName

Now, let’s talk about one of those combinations of two features that are probably not often used together.

You can tell QFont to stretch the font to a certain width:

You can also tell QFont to change the style of a given font, in this example to bold:

However, if you tell it to do both things, Qt forgets to do the stretching. After some digging, the fix ended up being a single line of code: https://codereview.qt-project.org/c/qt/qtbase/+/373727.

QPainterPath Did Not Respect SmallCaps in Some Situations

This bug was 10 years old! Let’s compare the old rendering (first below) and the fixed one (second below) 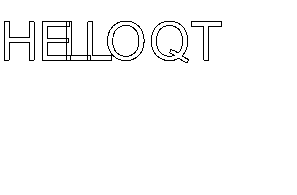 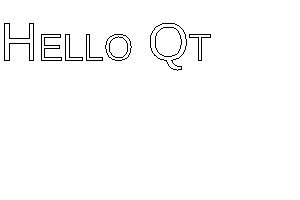 The old rendering was half right, the letters positions were correct, but they where not “small”. This means that the letters ended up overlapping each other.

For that feature to work, the font has to correctly identify itself as a Symbol font. Sadly, that’s not always the case, as it’s not the case with the D050000L font that comes with most Linux distributions, for example. Here’s how that font name is rendered: 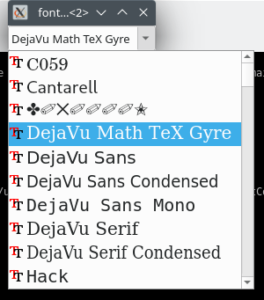 It’s definitely not easy to figure out what all those pencils are. 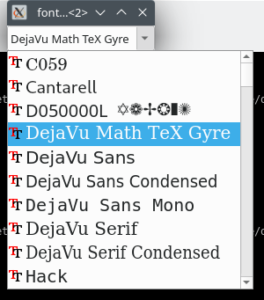 After some back and forth with the reviewers, we ended up discarding that in favor of a more generic solution. That consisted of adding two new functions, QFontComboBox::setDisplayFont and QFontComboBox::setSampleText, that allow you to set which font and text will be used to display the preview of the font in question. Thus, we are able to workaround the initial issue while also adding extra functionality — a win for everyone! 🙂

Getting Others to Fix Bugs for You

Sometimes when you try to fix a bug, your fix is not good enough. Fortunately, this doesn’t mean that all hope is lost. Your analysis of the situation may help the reviewers come up with a better solution.

This has happened twice in this series of bug fixes; let’s look at them.

Brush Transformations When Printing to a PDF File

Since brush transformations were not supported, I added a flag to the PDF printing engine that says so: https://codereview.qt-project.org/c/qt/qtbase/+/373978. Unfortunately, that flag regressed other features (the flags that mention which features are supported are not super detailed), so it had to be abandoned. But Eirik Aavitsland from The Qt Company came to the rescue and actually implemented support of brush transformations when printing to a PDF file with a one liner (as seen already a few times in this blog): https://codereview.qt-project.org/c/qt/qtbase/+/374484.

QDockArea Sizing When Starting an Application

This one took a while to investigate. At the end, the problem was identified as:

QMainWindow remembers a few things so it can restore its state when the application restarts. Among them are:

Now when starting the application, something like this happens:

The problem is that “I want to be maximized” is not always a synchronous function (e.g. Linux/X11). Because of this, you sometimes still have a small-ish window when you get to the “restore dock widgets sizes and positions” phase and the dock widget sizes don’t make sense. The window says, “Oh, you silly. I can’t give you 500 pixels of width for this dock widget; I’m only 400 pixels wide myself.” So, the dock widget gets a smaller size. Eventually, the window will get maximized, but your original dock widget size is already lost.