What is an Input Method and what do we need it for?

To answer that question, let’s see what Wikipedia says:

“An input method (or input method editor, commonly abbreviated IME) is an operating system component or program that allows any data, such as keyboard strokes or mouse movements, to be received as input. In this way users can enter characters and symbols not found on their input devices.”

So an input method allows you for example to input Chinese, Japanese, Korean or Indian characters into a text input field of an application, even though there is only a Latin keyboard attached to the computer. That is done by analyzing the text, which is typed in as Latin, and e.g. opening a popup menu with a pre-selection of Chinese characters, which are associated with that Latin input. The user can now select one of these Chinese characters, which will then replace the Latin input in the text field. 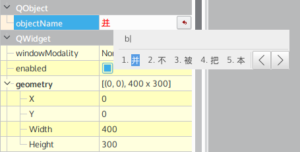 Since input method support is nowadays an important requirement for UI toolkits, it doesn’t come as a surprise that our favorite one (aka Qt) provides it as well. But since Qt is cross-platform, it doesn’t support only a single input method, but various ones, depending on the target platform.

In this blog post, we’ll have a closer look at how that is implemented, what classes are involved and where it can be extended or adapted.

To get an overview of the input method handling in Qt, let’s have a closer look at the involved components first: 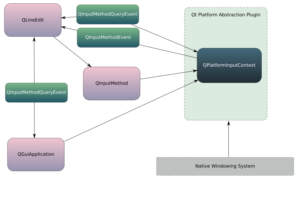 QPA plugin: Since version 4.8, Qt contains an abstraction layer (Qt Platform Abstraction), to simplify the porting of the UI parts of Qt to new windowing systems. This layer consists of a set of abstract interface classes (QPlatform*), which are reimplemented for the target windowing system and are bundled as a plugin that can be loaded at runtime. The central interface is QPlatformIntegration, which is instantiated from the plugin by QGuiApplication on startup, and provides access to all the other QPA interfaces.

While we now know the major players in the game and their roles, in the next step we’ll see how they interact with each other. For that, we follow a key stroke on the keyboard throughout the complete system until it shows up as character in a QLineEdit.

The first thing we need in our application is an input widget, which is sensitive to keyboard input. That is easily done by instantiating a QLineEdit. If the user now wants to type in a Chinese character, the first of his actions would be to give this QLineEdit the input focus by either clicking on it with the mouse pointer or navigating to it via the tab chain. As soon as the QLineEdit receives the focus, a private slot in QGuiApplication is called (_q_updateFocusObject), which executes the following steps:

So what does the event look like and what information can be queried? QInputMethodQueryEvent is the actual event that is used to query the information, and it allows QGuiApplication to query information from the focus object like:

In our case QGuiApplication sends a QInputMethodQueryEvent to QLineEdit and asks for the Qt::ImEnabled flag. QLineEdit responds to that event in the reimplemented QWidget::inputMethodQuery() method, by checking if the Qt::WA_InputMethodEnabled widget attribute is set. This attribute needs to be set by any widget that wants to use the input method system and is set by default on the text input classes (QLineEdit, QTextEdit etc.) in Qt. To query this information, the QPlatformInputContext sends a synchronous QInputMethodQueryEvent to the current focus object again, exactly as QGuiApplication has done it before. Once it has retrieved this information from the focus object, and forwarded it to the input method backend, the backend will compose a final character (or sequence of characters) that should be set as the new text on the QLineEdit. The composing is either done programatically (by following some writing system specific rules), or the input method system opens a popup menu with a pre-selection of possible characters from which the user selects an appropriated character.

So how does the composed text get back to the QLineEdit? For that, another synchronous event invocation is done. The QPlatformInputContext creates an instance of QInputMethodEvent and calls setCommitString() on it, with the newly composed text as parameter. Afterwards it sends the event to the focus object.

At that point, the key press event has reached its destination and the user is going to press the next key on the keyboard.

In addition to the commit string, the QPlatformInputContext could also create a QInputMethodEvent with a preedit string and send it to the focus object before composing has started or while composing is in progress. That preedit string is then shown inside the QLineEdit as intermediate result. The visual appearance of that text can be influenced by setting certain attributes on the QInputMethodEvent.

In the next blog post we will learn how to implement an out-of-process virtual keyboard, that uses Qt’s input method framework to communicate with Qt-based applications. Stay tuned!