Qt 3D makes heavy use of threads, as a way to spread work across CPU cores and maximize throughput, but also to minimize the chances of blocking the main thread. Though nice on paper, the last case eventually leads to added complexity. Sometimes, there are just one too many threads.

In the past, we’ve been guilty of trying to do too much within Qt 3D rather than assuming that some things are the developer’s duty. For instance there was a point in time where we’d compare the raw content of textures internally. The reason behind that was to handle cases where users would load the same textures several times rather than sharing one. This led to code that was hard to maintain and easy to break. Ultimately it provided convenience only for what can be seen as a misuse of Qt 3D, which was not the the original intention.

We had similar systems in place for Geometries, Shaders… Part of the reason why we made such choices at the time was that the border between what Qt 3D should or shouldn’t be doing was really blurry. Over time we’ve realized that Qt 3D is lower level than what you’d do with QtQuick. A layer on top of Qt 3D would have instead been the right place to do such things. We’ve solved some of these pain points by starting work on Kuesa which provides assets collections.

In the past couple of Qt releases we’ve been trying to simplify the code where it had become overly complex for debatable convenience. For Qt 5.14 we have decided to rework the threading architecture.

Before we dive into what has changed and what we gain from it, let’s first go over the architecture that was in place until 5.13.

Qt 3D Threading Architecture as of 5.13 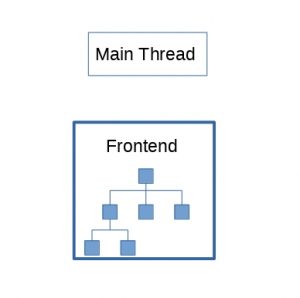 This is the Qt application thread where the Qt 3D Entity/Component scene tree lives.

This is the thread in which Aspects live. Each Aspect is responsible for maintaining an internal backend tree that reflects the frontend tree. A messaging mechanism has been set up in order to maintain frontend and backend trees in sync. Most of these messages contain a property name as a string and a value as a variant. 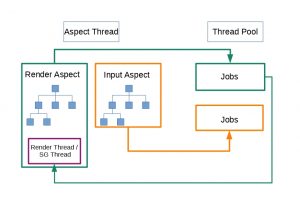 Each frame, based on changes and content of its backend tree, and each aspect will get a chance to schedule work that needs to be performed:

This is the thread tasked to submit the rendering commands that have been created previously by the render aspect’s jobs. The idea is that submitting these commands in a dedicated thread allows to unlock the Aspect and Main threads so that we can prepare content for frame n + 1 while rendering frame n.

One thing to be noted however, this thread is only available when using “pure” Qt 3D, in other words when using Qt 3D without QtQuick and Scene3D.

When using Scene3D, we instead rely on the SceneGraph Thread (which can potentially be the same as the main thread) to ask for the rendering commands to be submitted.

Since the Scene Graph thread is outside of our control, when it asks for Qt 3D to submit commands it could be that the Render aspect jobs in charge of preparing said commands have yet to be completed. To handle that case, we would return early in the renderer and expect that when we’re called again in the future, jobs would finally have completed.

This means that potentially Qt Quick and Qt 3D would not be rendering at the same refresh rate. This can be seen as good or bad depending on your use case:

If 3D content is just there but not critical, then having Qt 3D not block Qt Quick can be interesting for you. If on the other hand you want Qt Quick and Qt 3D to be synched, this was until recently not possible.

The loop behind Qt 3D that drives aspects, rendering and synchronization: 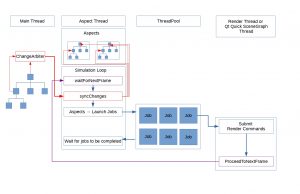 As you can see, aspects are living in their own thread. The main reason for this is to allow Aspect to launch jobs and communicate while the main thread is blocked. This unfortunately forces to use string based messages to synchronize the trees. It also makes synching between threads to handle all cases quite difficult.

What have we done for Qt 5.14? Simply put, we’ve removed the Aspect Thread.

Well, what’s the gain of having it? Even if the Aspect thread can spin freely while the main thread is blocked do we really benefit from this behavior?

From experience, in 90% of cases, we use Qt 3D with Scene3D. Which means that if the main thread were to be locked, Qt Quick wouldn’t sync and Qt 3D wouldn’t render anything.

So arguably, we have a thread that’s making things more complex to handle a case that very few of us might benefit from. This benefit couldn’t offset the difficulties that resulted from it: 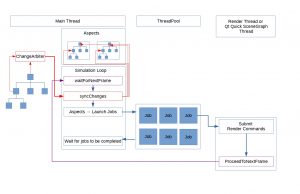 What do we gain from that?

This now means Aspects and the simulation loop are performed in the main thread.

Gains from that are:

In a follow up article, we will see how Qt 5.14 was also modified to change the way the scene state get sync’ed between frontend and backend nodes, providing significant performance gains on very dynamic scenes.