At the heart of every 3D application is geometry. Qt 3D-based 3D applications are no different and require the user to either generate geometry or provide asset files for Qt 3D to load. This blog post demonstrates how Blender and its Python API could be used to write an exporter that generates geometry for Qt 3D.

For those of you not yet too familiar with Qt 3D, let me remind you that Qt 3D is based on an Entity Component System. A given Entity gets its behavior defined by the various components it aggregates.

There are currently 3 ways to incorporate geometry in a Qt 3D application:

These are all QGeometryRenderer subclasses which take care of generating geometry based on configurable properties. It’s up to you to provide a Material that will shade your geometry.

Several backend plugins are available for .obj, .fbx and gltf version 1. The list of plugins will likely grow in the future (work on a gltf version 2 importer is currently ongoing). QMesh is also a QGeometryRenderer subclass, you also need to provide a Material.

QSceneLoader is also plugin based. At the time of writing, one such plugin is based on the Open Asset Importer Library (Assimp) which supports the following formats.

In most cases you’ll either use QSceneLoader to load a rather complex scene or, if you know how the scene content is structured, decide yourself on which parts you need and use several QMesh components.

Now this is all fine but you’ll often end up with one of these issues:

From a general perspective, the current mechanisms make it tedious for the developer to control a complex scene. They either completely hide away the structure of a loaded subtree or, on the contrary, force you to know exactly what composes your scene and let you do the heavy lifting of deciding which meshes you care about.

If you are after performance, you need to know how your scene is structured, which materials are in use and how large your geometries are. With this information you can decide if you need to:

So what if instead of loading something blindly, we generated Qt 3D content in advance, as part of our tooling or asset conditioning work?

Blender is a free and opensource 3D creation suite. I wouldn’t go as far as saying that it’s intuitive to use for a newcomer, but it’s a really powerful tool. In addition, it provides a powerful Python API which can be used to write importers, exporters or simply automate processes (importing and exporting geometries offline). The nice thing is that the API is documented, the bad thing is that the documentation is mostly a list of methods and members…

How could Blender solve any of the issues we have?

Instead of generating or loading geometry at runtime, I therefore decided I would try to experiment and write an exporter plugin for Blender. The goal for it would be to generate the QML content for an application (though we could easily extend it to cover C++ as well) and export the geometry buffers to binary files that just need to be read at runtime without requiring any parsing.

This could solve the issues of slow startup caused by parsing text-based files and possibly duplicating effects and materials. This also solves the case of import plugins deployment (as we are now performing this offline) and only shipping binary files that can be read with the readBinaryFile functions on the QML Buffer element. Finally this also gives us the complete structure of our scene.

A blender addon can be easily created by subclassing bpy.types.Operator and optionally bpy_extras.io_utils.ExporterHelper which provides convenience helpers as well as a default UI layout.

Overview of an exporter class

Most of the work will be done in the execute method. When reaching that point you’ll want to:

We can do a lot of things with the Blender API, the hard part is really finding out what you need

In our particular case we only care (for a first version) about:

Now that we know what we care about, the next part is traversing these collections and converting them to Qt 3D content.

First we need to go over all the meshes in the scene and gather information required to convert these to QGeometryRenderers, QGeometry, QAttributes and QBuffers.

The idea is to go over each Blender mesh and process then as follows:

We keep the data we have produced here for later.

Next, we need to gather information about each instance of Material of the scene to later on create and instantiate QMaterial subclasses.

For now the exporter is only recording the name, ambient, diffuse and specular color. Later on I’d like to extend that to either export a shader directly or switch to PBR materials.

Once we’ve created an intermediary representation for our mesh data and material data, we can proceed with the actual exporting of the scene.

The idea is to retrieve all the objects references by the BlenderScene. Then, from these objects, we can create a hierarchy.

Finally it’s just a matter of traversing the tree.

What type of object we are dealing with?

All of the above work has been implemented in a dedicated Exporter class. It is instantiated and called in the execute function of our addon which looks like below:

Well actually it does.

As a test sample I’ve used a mesh from blendswap 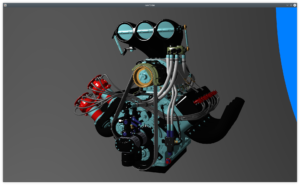 Where to get it?

Here. Usage instructions are provided on the repository. It should work with pretty much any blender scene. Just make sure you have assigned a material to the elements you want to export.

6 thoughts on “Exporting 3D content for Qt 3D with Blender”