Kuesa™ 3D is a complete design-to-code workflow solution for 3D in real-time applications, centered around the open glTF™ 2 format, supported by Blender, Maya and 3ds Max.

In short, Kuesa provides a workflow that simplifies work for both designers and developers. It is centered around the glTF 2 format. The idea behind Kuesa 3D is that changes made on 3D models shouldn’t require much, if any, work on the developer’s side. As a consequence, you can iterate more frequently, get feedback more often and release on time.

In this blog post, we will highlight some of the new features we have introduced. You can get the full details here.

The glTF 2 format currently only supports a Metallic Roughness physically-based material. As a result, it looks great but can be very expensive to render and requires lots of assets. For many use cases, simpler materials can be used instead: this is what the Iro Material library offers.

The library provides several materials that simulate reflections, clear coats of paint or simple transparent surfaces. The benefits of Iro materials are twofold:

This video by my colleague Timo Buske shows Iro Materials in action:

Despite a steep learning curve, Blender is a fantastic tool and the latest version brings lots of interesting features to the table. For that reason, we have added support for Blender 2.8.

We can therefore now rely on the official glTF 2.0 export bundled with Blender. Furthermore, to make the best use of it, we’ve contributed patches that allow extending the exporter through custom extensions.

Then, we’ve added an extension to allow exporting of Iro Materials to glTF 2.0 files. In addition, we’ve also updated the Kuesa Blender addon to show a real time preview of the Iro Materials in Blender. What you see in Blender is what you’ll get with Kuesa 3D.

Currently, glTF 2.0 only supports animating transformation properties (translation, scale, rotation) of objects. Incidentally, there is a draft of an extension EXT_property_animation to add support to animate any property.

Since that was a really important feature for us, we’ve decided to implement it for Kuesa 3D. In that sense, we’ve added a custom EXT_property_animation to the exporter. Next, we’ve updated the glTF 2 importer in the Kuesa 3D Runtime library to parse it properly.

Hence, we can now animate material, lights or camera properties in Blender, export the scene as a glTF file (with the extensions) and load it with Kuesa 3D Runtime.

With this new release, we changed the offering of the product to satisfy different use-cases.

Kuesa 3D Studio is the complete solution a team can use in production, with everything needed to satisfy both designers and developers:

The Kuesa 3D Tools and Runtime also support any glTF 2.0 files coming from other application like Maya, 3DS Max or others, as long as they can export to glTF 2.0. 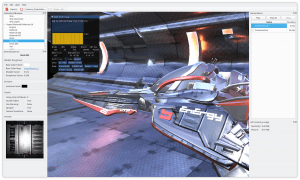 You can find out more about Kuesa 3D Studio here.

Kuesa 3D Runtime is also available as a separate product, full support from us. The product is available directly from us. This is perfect if you want to try out Kuesa and see what you can do with it.

Like previous releases, it is freely available under the AGPL 3 license.

Since it is built on top of Qt 3D, you can use the full Qt 3D API to further customize your application. For the most part, you can leverage things like Picking, Camera handling and a lot more for free.

As for actual Qt requirements, Kuesa 3D Runtime requires either the latest Qt 5.12 or the new Qt 5.15 release.

You can download Kuesa 3D Runtime from our GitHub repository.

Watch our Realtime Music Box short video where I explain all this running on one of our demos: