Clazy is a clang plugin which extends the compiler with over 50 warnings related to Qt best practices ranging from unneeded memory allocations to API misuse. It’s an opensource project spawned by KDAB’s R&D efforts for better C++ tooling.

Today, we’re proud to announce a Clazy Web UI to view all warnings emitted by Clazy, as well as normal gcc/clang issues.

Furthermore, we’ll be hosting it publicly for the Qt code base. This means that you can now head over here and view issues for the dev branch, updated daily: 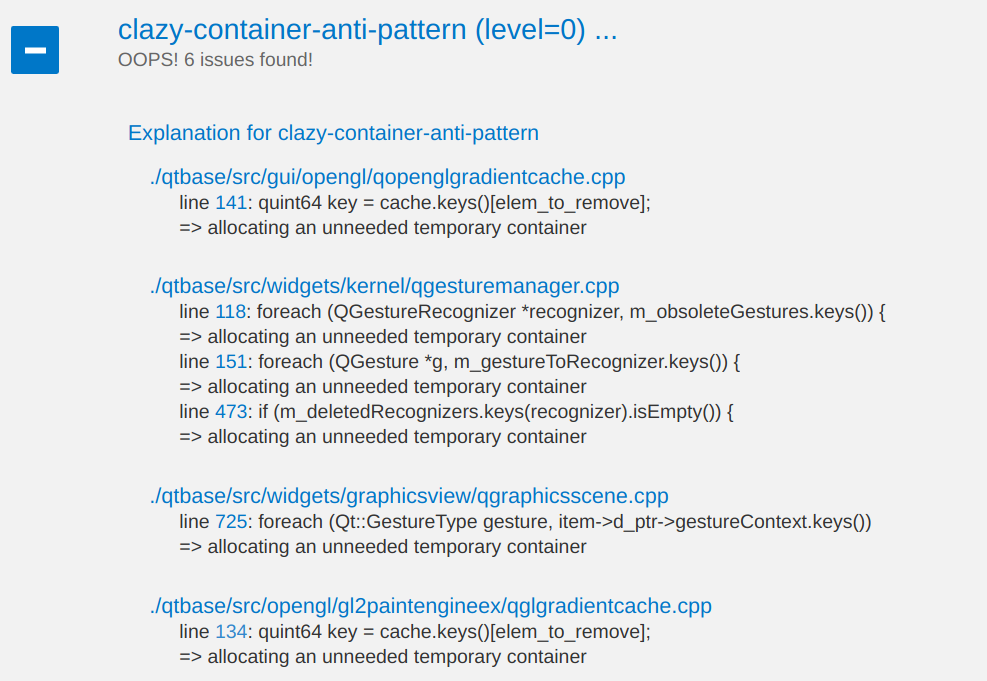 We have a pretty cool Continuous Integration infrastructure to take care of our customers’ code: the CI team is constantly writing new extensions to support all kinds of linters, static checkers, sanitizers and code coverage tools. So when I asked them for a graphical way to view Clazy’s results, they jumped on it immediately and agreed it made sense to also run it on Qt.

The usage is self-explanatory, you can click on different Qt modules, then for each module you can expand a warning type and see all source locations where it happens. You can also filter by level: bigger levels can have false-positives, or simply be more noisy or less important.

We also hope to attract new contributors to Qt who wish to start off with simpler tasks. Fixing Clazy warnings is usually easy and might be the incentive users need to surpass the initial barrier of setting up gerrit and learning a new process. After their first commit they’ll be more likely to contribute patches for existing bugs.

Update: The results for Qt Creator are now also being generated, here.